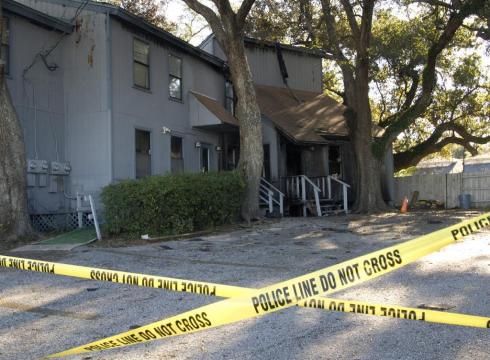 An abortionist arrested and charged with murder once worked at a Pensacola abortion clinic that was burned early Sunday, January 1st, 2012.

Steven Chase Brigham replaced slain abortion practitioner John Britton at The Ladies Center in Pensacola, Florida in late 1994. He stopped working there in the wake of the New York and New Jersey board actions. His Florida license was suspended February 5, 1995. Brigham left Florida after pro-life activist Vicki Conroy brought his New Jersey and New York suspensions to the state medical board’s attention. Brigham was notified of the suspension at the Pensacola airport where he was about to catch a plane. His license was later permanently revoked in the state of Florida.

He apparently regained his license, but was suspended again in 2010 over similar violations.

On January 1, 2012, the Pensacola abortion mill where Brigham had worked was damaged by a suspicious fire that the FBI is now investigating.

This is the same abortion mill that closed over two years ago after being fined for not having a valid lab license. The clinic soon reopened after being taken over by an abortion corporation based out of New Jersey.

Some news outlets have noted that Brigham was the abortionist listed at the New Jersey address for American Medical Services. Although he worked in Pensacola in the early 1990s, the current relationship is uncertain.

I doubt it was the abortion clinic owners themselves that lit the fire as some have alleged. It was probably someone reacting to the news that Brigham was the one arrested and charged with murderer. It’s an interesting twist on this story.

However, the most recent abortion mill fire will have the same negative effect on pro-life street activism as did the shooting-death of George Tiller, which was absolutely nothing. I noted at the time that the press reacted with almost boredom. Where were the cries of outrage that we heard when Davin Gunn and John Bayard Britton were shot in 1993? In comparison, the shooting death of Tiller had the same effect as when a Libyan mob murdered Gadhafi without due process of law. While we ought to condemn vigilantism, these “doctors” are murderers even according to our laws. They not only do late term abortions, but also commit infanticides of babies born-alive.

So what is the appropriate response to legal inaction toward these murderers and the mainstream media blackout?

Pro-life street evangelists should keep on doing just what they are doing peacefully and consistently with as much grace as God gives them. We need to keep crying out in the streets that babies — born and unborn — are being butchered in these abortion mills. Our response can never be vigilantism, but neither should we respond with shock or outrage when undisciplined renegades take that course.

I have written two articles against so-called “defensive action” from a theonomic perspective. One was published in Chaldedon Report when R.J. Rushdoony was still alive. The other was more recently published at the Statesman Global Initiatives blog. I argue that the defensive action advocates are wrong for a number of reasons.

But here’s the rub.

Now comes the thought that someone may be provoked after hearing about the atrocities committed by Florida late term abortion chain owner, James S. Pendergraft. He and abortionist Randall Whitney cavalierly admitted in lawsuit depositions that they do illegal late term abortions and leave babies born alive to die. (An article based on court room eyewitness notes and transcripts is forthcoming.)

If someone who does not share our sanctity of life ethic takes retaliation into his own hands, the media will focus on these isolated incidents of violence.

Who then will expose the inaction of our local politicians, law enforcement and the uninterested mainstream media?

“Have nothing to do with the unfruitful deeds of darkness, but rather expose them” (Ephesians 5:11).

The Beast of Revelation: Identified (DVD)

Who is the dreaded beast of Revelation?

Now at last, a plausible candidate for this personification of evil incarnate has been identified (or re-identified). Ken Gentry’s insightful analysis of scripture and history is likely to revolutionize your understanding of the book of Revelation — and even more importantly — amplify and energize your entire Christian worldview!

Historical footage and other graphics are used to illustrate the lecture Dr. Gentry presented at the 1999 Ligonier Conference in Orlando, Florida. It is followed by a one-hour question and answer session addressing the key concerns and objections typically raised in response to his position. This presentation also features an introduction that touches on not only the confusion and controversy surrounding this issue — but just why it may well be one of the most significant issues facing the Church today.

Ideal for group meetings, personal Bible study — for anyone who wants to understand the historical context of John’s famous letter “… to the seven churches which are in Asia.” (Revelation 1:4)