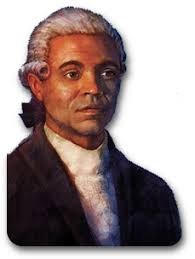 Prince Hall (1735–1807) was held as a slave by William Hall, in Boston until the age of 35, when he was freed. Hall used his freedom to become an advocate for African Americans. Hall made many petitions on behalf of free blacks and successfully petitioned for the release of three Boston African Americans who had been kidnapped into slavery.

While most Americans are familiar with the 18th century abolitionist movement, Abraham Lincoln and the Emancipation Proclamation, few know about the reasons for the abolition of slavery in the northern states in the 1770s. Prince Hall’s Petition to the Massachusetts General Assembly (the state Supreme Court at the time) used the argument of the Declaration of Independence that all men are created equal with the right to Life, Liberty and the Pursuit of Happiness to argue for the abolition of slavery.

Prince Hall’s Petition became the precedent for the abolition of slavery in Massachusetts and then all the northern states through state courts and state constitutional law.

The Petition of a great number of Negroes who are detained in a state of Slavery in the Bowels of a free & Christian Country Humbly Shewing:

That your Petitioners apprehend that they have, in common with all other Men, a natural & unalienable right to that freedom, which the great Parent of the Universe hath bestowed equally on all Mankind, & which they have never forfeited by any compact or agreement whatever—But they were unjustly dragged, by the cruel hand of Power, from their dearest friends, & some of them even torn from the embraces of their tender Parents, from a populous, pleasant and plentiful Country—& in Violation of the Laws of Nature & of Nation & in defiance of all the tender feelings of humanity, brought hither to be sold like Beasts of Burden, & like them condemned to slavery for Life—Among a People professing the mild Religion of Jesus—A People not insensible of the sweets of rational freedom—Nor without spirit to resent the unjust endeavours of others to reduce them to a State of Bondage & Subjection.

Your Honors need not to be informed that a Life of Slavery, like that of your petitioners, deprived of every social privilege, of every thing requisite to render Life even tolerable, is far worse than Non-Existence—In imitation of the laudable example of the good People of these States, your Petitioners have long & patiently waited the event of Petition after Petition by them presented to the legislative Body of this State, & can not but with grief reflect that their success has been but too similar.

They can not but express their astonishment, that it has never been considered, that every principle from which America has acted in the course of her unhappy difficulties with Great-Britain, pleads stronger than a thousand arguments in favor of your Petitioners.

They therefore humbly beseech your Honors, to give this Petition its due weight & consideration, & cause an Act of the Legislature to be passed, whereby they may be restored to the enjoyment of that freedom which is the natural right of all Men—& their Children (who were born in this Land of Liberty) may not be held as Slaves after they arrive at the age of twenty one years.

So may the Inhabitants of this State (no longer chargeable with the inconsistency of acting, themselves, the part which they condemn & oppose in others) be prospered in their present glorious struggles for Liberty; & have those blessings secured to them by Heaven, of which benevolent minds can not wish to deprive their fellow Men.

And your Petitioners, as in Duty Bound shall ever pray.

Prince Hall continued his activism by protesting that African American children did not have public schools. Eventually he started a school of his own for them.

«- Personhood Florida and Abortion Abolition
-» Caesar Nero: The Sixth Head of the Beast

Why Creeds and Confessions? (Book)

﻿Driving down a country road sometime, you might see a church with a sign proudly proclaiming: “No book but the Bible — No creed but Christ.” The problem with this statement is that the word creed (from the Latin: credo) simply means “belief.” All Christians have beliefs, regardless of whether they are written.

Yet a single book containing the actual texts of the most important creeds of the early Church will not often be found. Out of the multitude of works on the evangelical Christian book market today, those dealing with the creeds of the Church are scarce.

Why Creeds and Confessions? provides a foundation of biblical orthodoxy as a defense against the false and truly heretical doctrines advanced by the spirit of this age.