What would Jesus do?

We have all seen the “WWJD?” slogan emblazoned on bumper stickers, buttons, wrist bands and t-shirts. The implication of this maxim is that we are always supposed to ask ourselves how Jesus would behave in any situation we encounter. If we cannot possibly imagine Jesus himself doing such a thing, then it must be something to avoid.

A young fighter pilot completes his training and is about to receive his first assignment. He is called into a meeting with his superior officer. The officer holds a classified file in his hands and an unlit cigar in his mouth.

“Your first mission is due to commence at an unspecified hour later this week. You will be flying into enemy territory. It will be a bombing mission into an area populated by Al-Qaeda insurgents. Collateral damage including some civilian casualties is possible, although we will take every precaution to avoid that.”

The commander pauses and leans forward. He holds the cigar in his left hand as he eyes the young pilot. “I see that you have listed your religious preference as ‘Born-Again Christian.’ Is that going to present you with any moral or ethical problems in completing this mission?”

The young man thinks for a moment and then answers, “Sir, I am willing to do anything to protect and serve my country. However, whenever I face a moral or ethical dilemma, I do the following.”

He hands his officer a button with the letters WWJD printed on it. He explains what it means.

The commander strokes his chin and appears lost in thought for a few moments. In his mind’s eye, he sees a fighter jet taking off from an aircraft carrier. After the jet arrives at the designated coordinates, the pilot’s hand reaches forward to press the button to release the bomb load. The imagines a nail scar on that hand – a hand that could belong to only one Man in history.

At the thought, his jaw drops open and the cigar drops out of his mouth.

“That’s the most ridiculous %^@# thing I have ever heard! You are clearly incapable of carrying out this mission! You are dismissed!”

A strict reading of WWJD would show us that Jesus never served in the military. Therefore, Jesus would never run a bombing mission against Al-Qaeda as a fighter pilot. The problem with this logic is that when someone asks the question, “What would Jesus do,” they are implying that if Jesus did not do “that,” then we aren’t called to do “that” either. Jesus never got married and never had any children. Do they intend to forbid us to marry, as Paul warned some would? (1 Timothy 4:3). Jesus never ran for political office or served in the military. Does that mean Christians are not called to do this either? 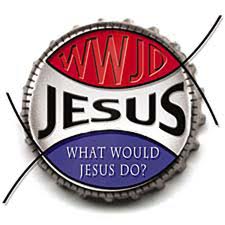 A fundamental problem arises when we think of Jesus as being in the form of the man revealed in the Gospels. That is not wholly accurate. Jesus appears in every book of the Bible. He appeared in the form of a man or an angel many times throughout the Old Testament – these occurrences are sometimes called “Theophonies.”

God is Father, Son and Holy Spirit. He is one God in three persons. “Jesus Christ is the same yesterday, today and forever” (Hebrews 13:8). “There is no shadow of turning with God the Father” (James 1:17).

This means that Jesus made the decision to destroy Sodom and Gomorrah by raining down fire and brimstone (Genesis 19:24). It means that Jesus commanded Moses and then Joshua to obliterate the tribes of Canaan sparing no one – even the women, children and livestock. If we think that this “wrathful” nature of God, subsided after the cross, we need to look at such passages in the New Testament as Ananias and Sapphira being killed by God for lying to the Holy Spirit (Acts 5:1-11) and Herod being struck down and eaten up by worms (Acts 12:23).

Finally, we need to look at the image of Christ as judge of all creation sitting on the Great White throne in Revelation 20:11-15:

Then I saw a great white throne and Him who sat on it, from whose face the earth and the heaven fled away. And there was found no place for them. And I saw the dead, small and great, standing before God, and books were opened. And another book was opened, which is the Book of Life. And the dead were judged according to their works, by the things which were written in the books. The sea gave up the dead who were in it, and Death and Hades delivered up the dead who were in them. And they were judged, each one according to his works. Then Death and Hades were cast into the lake of fire. This is the second death. And anyone not found written in the Book of Life was cast into the lake of fire.

We are mistaken if we think that just because Jesus did not do something, we should not do it either. We are equally deceived to think that we can “be Jesus” to the whole world. There are some actions that are reserved for Christ alone. No, we cannot burn a Muslim. But one day, Jesus will burn all who do not repent and believe. We need to preach this message, but before we do that, we need to have a proper understanding of Jesus as both fully man and fully God from Genesis 1:1 to Revelation 22:21.

The Forgotten Power of the Public Proclamation of the Gospel

The United States of America 2.0: The Great Reset

Frank Schaeffer Will You Please Shut Up!

America’s moral crisis and what Christians must do