ORLANDO, Florida (www.forerunner.com) – James Scott Pendergraft IV, a Florida abortionist who has had his medical license suspended four times, is a respondent in a complaint filed on April 24th, 2012 by the Florida Department of Health. The complaint states that Pendergraft still owes a fine of $121,303.21 stemming from a previous suspension of his license in 2010. The complaint concludes:

James Pendergraft spent time in federal prison in 2001 for extortion and perjury. He has had his license suspended four times for various reasons including performing late-term abortions in an outpatient facility in violation of Florida law. Now it is possible that the troubled abortionist may have his license permanently revoked.

Last July, Pendergraft was sued for $36.7 million for a 2001 incident in which a botched late-term abortion resulted in a live birth. The baby girl who was born alive was left severely handicapped for life. Since July 2011, Pendergraft’s assets have been subject to numerous garnishments in an attempt to collect some of the money owed from the lawsuit.

Pendergraft is the owner of five still-operating Florida abortion clinics. While on suspension several other abortionists have covered a circuit between his clinics. 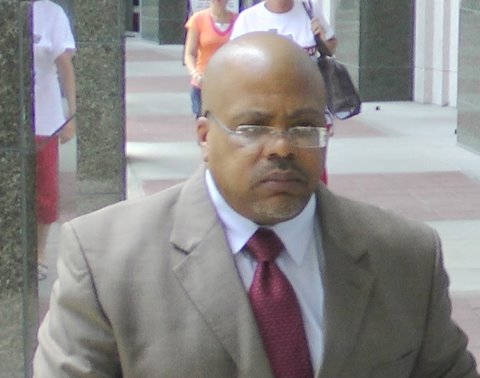 James Scott Pendergraft appears at the Orange County, Florida courthouse last July awaiting the jury verdict that awarded a plaintiff $36.7 million. The lawsuit stemmed from a 2001 botched abortion in which a baby girl was born alive and has suffered lifelong handicaps. (Photo credit: Ken Scott)

Below is the full text of the administrative complaint.

Petitioner, Department of Health (Department), by and through its undersigned counsel, hereby files this Administrative Complaint before the Board of Medicine against Respondent, James Scott Pendergraft, IV, M.D., and in support thereof alleges:

2. At all times material to this Complaint, Respondent was a licensed physician within the State of Florida, having been issued license number ME 59702.

5. On or about March 31, 2010, the Department of Health/Compliance Management Unit filed a complaint alleging that Respondent had violated a Final Order of the Board, by failing to pay the fine and costs totaling $121,303.21 by February 26, 2010, 30 days from the date of the filing of the Final Order.

6. On or about August 30, 2010, the Department received a letter from Respondent wherein he requested a detailed extension/payment arrangement. Respondent also submitted a check for $1,000.00 under separate correspondence.

7. Respondent’s request for an extension/payment arrangement was denied since it was made after the case was referred for noncompliance.

9. Section 458.331(1)(x), Florida Statutes (2009), provides that violating a lawful order of the Board or Department previously entered in a disciplinary hearing or failing to comply with a lawfully issued subpoena of the Department constitutes grounds for discipline by the Board.

11. Based on the foregoing, Respondent has violated Section 458.331(1)(x), Florida Statutes (2009), by violating a lawful order of the Board previously entered in a disciplinary hearing.

«- The Hammer of God – The Florida Pro-life Network
-» Postmillennialism: The Abrahamic Covenant

Regarding these garnishments mentioned in the huge judgment, are they allowing him to stay in business killing babies so he has money to pay for the one baby he failed to kill?

You rightly point out that it may be that the people Pendergraft owes money to have an interest in seeing him stay in business. As sick as that sounds, it may be true.

Remember that when talking to your people about this. Permanent suspension or revocation is one of the recommendations by the FL DOH to the Board of Medicine. The others are less severe and would allow him to get his license back when the current suspension is up.

This situation needs a lot of prayer.

I don’t think Pendergraft will get his license back too easily because he has shown nothing but contempt for disciplinary actions taken against him. He believes that he is a “God-loving Christian” and that he is doing a good thing by providing services to women.

Likely they will suspend him until his fines are paid or they may permanently suspend him.

The best thing to happen would be not revocation of his license but to close his five abortion mills in Florida. I don’t think that will happen, but the $36.7 million lawsuit judgment against him coupled with the negative publicity due to all these actions might bankrupt him.

John Barros told us that one of the mill workers said they were closed one day last month for a staff meeting to discuss restructuring in light of a possible bankruptcy. This tells me Pendergraft is going to do everything he can to stay in business and avoid paying the fines and the lawsuit judgment against him.

We found in Melbourne in the 1990s that awareness campaigns — which include residential pickets as well as many other strategies — are one of the most effective ways to get abortionists to quit. In all about 24 abortionists quit working at Aware Woman over the years. Finally, the mill began flying in an abortionist from Ohio who would then travel a circuit at mills in Florida. This was William P. Egherman who is the abortionist who injured Kelly Clinger at OWC.

Thank you for witnessing for these little babies who have no voices.

“Give me liberty or give me death!”

Patrick Henry’s famous declaration not only helped launch the War for Independence, it also perfectly summarized the mindset that gave birth to, and sustained, the unprecedented experiment in Christian liberty that was America.

The freedom our Founders envisioned was not freedom from suffering, want, or hard work. Nor was it freedom to indulge every appetite or whim without restraint—that would merely be servitude to a different master. No, the Founders’ passion was to live free before God, unfettered by the chains of autocracy, shackles that slowly but inexorably bind men when the governments they fashion fail to recognize and uphold freedom’s singular, foundational truth: that all men are created in the image of God, and are thereby co-equally endowed with the right to “life, liberty, and the pursuit of happiness.”

This presentation is a similar call, not to one but many. By reintroducing the principles of freedom that gave birth to America, it is our prayer that Jesus, the true and only ruler over the nations, will once again be our acknowledged Sovereign, that we may again know and exult in the great truth that “where the Spirit of the LORD is, there is liberty” (2 Cor. 3:17).

Welcome to the Second American Revolution!